Walter was born around the same time Henry Ford had given birth to the first Model A car.  Teddy Roosevelt, the United States 25th president was in office for 2 years already.  When Walter was at 2 months of age, Orville and Wilbur Wright got credit for making the first human flight.

Walter is 1 year old + during the 1905 Wisconsin Census

Residing at the "Loud Boarding House" location during 1930 Census 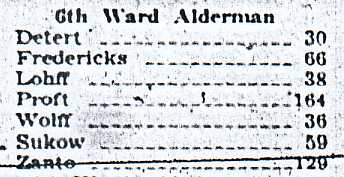 Had a nickname of "Pickles Proft" and he did a lot of umpiring of baseball games.

Had a nervous breakdown a few years prior to his death.

Employed as a machinist at Merrill Manufacturing for many years. Company gold watch recipient.

Father of 2 sons. Grandfather of 6 grandsons and 2 granddaughters. Pictured with his first grandson, Jay Walter Proft

Died: Wednesday - December 9, 1964 at his residence in Merrill, Wisconsin from multiple organ failure.

He was buried next to his parents and sister in Merrill, Memorial Park, St. Francis Catholic Cemetery.